Are you ready for fall? Have all your Halloween decorations out?

There's always room for MORE Holiday decor right? And if you have kiddos, grand-kiddos, or furr-babies that costume-up for Halloween why not incorporate pics of them into a special project.

Halloween was one of the holidays I enjoyed the most when my kids were little. I couldn't wait to take them to the fabric store to pick out a pattern for whatever they wanted to dress up as that year.

And of course, there HAD to be a photo shoot of them in their costumes before they went out trick-or-treating. Looking back through the photos from some of those years, I thought it would be fun to show them off in a Halloween project. 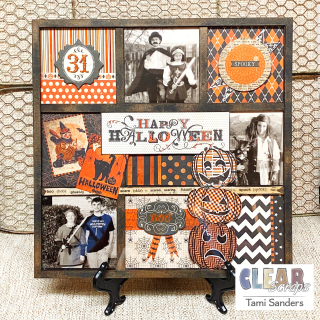 I started by laying one of the grid chipboard pieces on the solid back and used a pencil to mark around each section. I prefer to adhere the pictures and papers directly to the back piece of the frame. 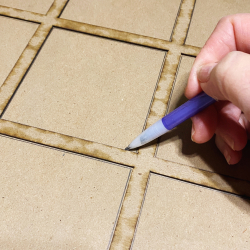 Next I worked on planning the layout. I first laid out my photos, then began adding papers and embellishments. 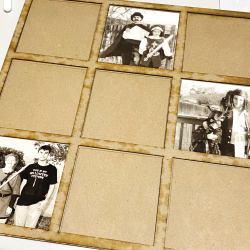 Once I decided on the design, I began adhering the photos, papers and embellishments to the frame base, using the penciled areas as guides. Check placement by laying a grid chipboard piece over the base.

I planned to add some of my embellishments over the grid, so I needed to cut away the grid insert from one of the frame pieces to use as the top layer. 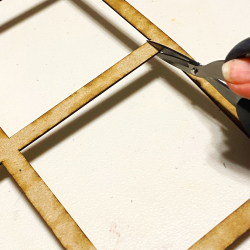 To add color to the frame, I sprayed it with a black spray ink, and dabbed the excess with a paper towel. This step was done to one of the grid pieces as well as the piece I had removed the grid from. The pieces were set aside to dry. 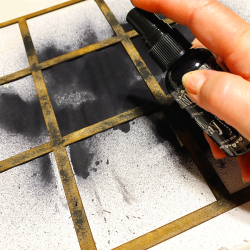 I wanted to incorporate some pumpkins in the frame. I used the 3 X 12 Pumpkin Faces Border Stencil to trace pumpkins on printed paper. The eyes and mouths were filled in and the grooves in the pumpkin were darkened using a black pen. A white gel pen was used to add definition to the eyes and mouths.

I adhered 2 of the grid layers to the base; adding the inked one last. 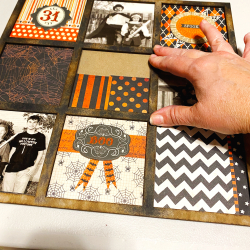 I added the elements that were to be adhered across the grids. Then I removed the protective film from both sides of the acrylic sheet and adhered it to the frame.

The chipboard piece I had cut the grid out of was adhered last to finish the frame. 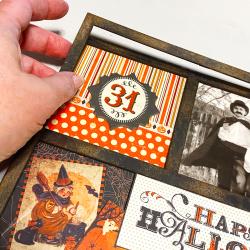 I hope this project has inspired you to do something special with pics of YOUR costumed characters!