It's Nancy Nickel here with a new project share!

Today I am featuring the Expressions Large Fall V piece,

which you can find right HERE.

This is a wonderful piece of clear acrylic that measures 5"x 15".

It comes with a protective film on both sides,

that you just peel back when you're ready.

The creative possibilities are absolutely endless!!

Here is what I made:

I began by placing the "F" in an embossing folder,

and de-bossing an owl at the base of the letter.

I did this before removing the protective film.

After it was removed from the embossing folder,

I removed the protective film from the back of the letter.

Then I used StazOn ink in Ganache,

and a Fantastix coloring stick, to color my owl.

Then I added Jet Black StazOn ink for the eyes and lashes.

I adhered a die-cut pumpkin behind the owl before adding the woodgrain paper.

I also added a large die-cut leaf on the one side.

I removed the protective film from the front of the letter,

and added three enamel dots, and a pretty ribbon bow. 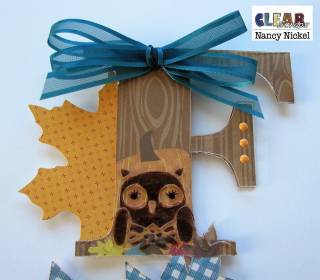 In place of the "A" in Fall there is a lovely Maple Leaf.

I removed the protective backing, and added the checked paper to the back.

After removing the protective film from the front,

I added three enamel dots, and a die-cut flourish.

I also added a small ribbon bow around the stem. 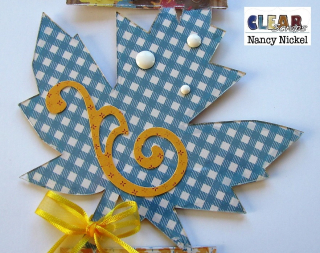 and adhered paper to the back of the first "L".

I added another large die-cut leaf behind the letter. 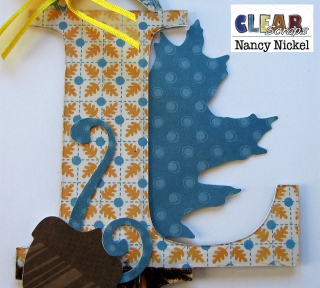 While the protective film was still in place,

I ran the second "L" through a decorative embossing folder.

After it was embossed, I removed the protective film from both the front and the back.

I inked the back of the letter with the Ganache StazOn Ink.

Once it was dry, I adhered yellow paper behind it.

I then adhered the pumpkin and crow in place, on the back of the letter.

The die-cut flourish, acorn, and leaves were added to the front.

Finally, a small ribbon bow was adhered in place. 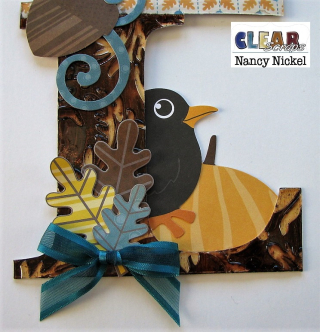 Here's one final look at the finished piece:

Thanks so much for stopping by today!

I'll be back very soon with another project share! :o)