Hey there Clear Scraps friends, it is Pinky today with my tag for March using the new Clear Scraps Tag Album & Tag Box Set from the 2016 CHA Release!

I was really feeling the rainbow, neon vibe so I decided to experiment and make a very colorful tag for the month. 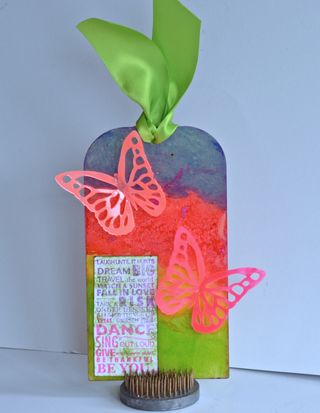 For this take I used four different alcohol inks which I dropped onto the back of the tag from the Tag Album after removing the protective film. Then I allow it to dry.I tamped it with a dabber to spread it all out.

After it dried completely I used a very light yellow spray paint (Krylon) to paint over and make it more opaque. 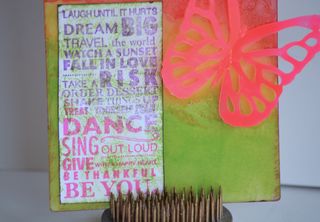 You will never guess what I used for the Clear Scraps Butterfly Mixers?! I used nail polish, yes regular old nail polish. They were sitting by my craft table the I thought the colors would go so well, so I removed the protective film from the backs of the butterflies, then I coated each one in nail polish and set it aside to dry while I created the stamped sentiment. 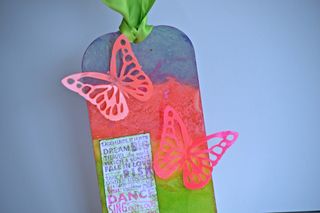 Now I tried to stamp on the tag directly but the color wasn't as bright as I wanted, so I used nail polish remover and removed the stamped image and stamped it on paper. Then distressed it with StazOn green inks.

I used a vivid green ribbon for the top after everything tried up nicely and yes it takes some time, but it was worth it, changing techniques.

I hope you enjoyed my project today, it was a fun experiment!

Happy Monday my friends, until next time, keep on creating.