Raechelle here. :) You know when you get those ideas in your head, but once implemented it turned out nothing like you had envisioned so you change direction? This is how this project began and then ended up.

I wanted to add some "bubbles" to the background so I pulled out the 12" circle stencil and began filling the spaces in with a mixture of Gesso and some blue and white paint. At first I filled in a few spaces, but decided I needed a few more. It was then that I thought that it was overkill, so I started to think how I could salvage and utilize the "bubbles" differently. 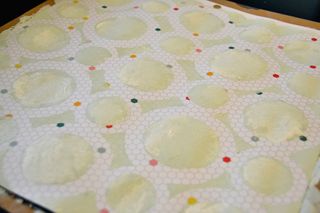 I decided that I would just punch them out and add them to the layout, however my punches were not large enough so I just cut them out with a scissor. The paint made a great guide. Sometimes we do not always think of the creative possibilites that a tool, such as a stencil or Maskil, can provide. This is the first time I have ever thought to use a stencil this way- I had a bit of an aha! moment, although I am sure I am the last one to figure this out. lol

One I assembled my layout, I then added several of the cut "bubbles" to complete the layout. I adhered them with craft glue just in the center so they would have some dimension and appear to float on the page. 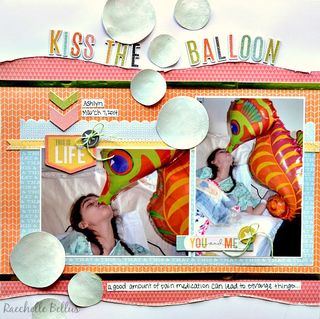 A little story about this layout. Our youngest daughter had surgery in early March and was in the hospital for 5 days and on a lot of heavy pain medication. She has no recollection of kissing this giant balloon, but I am glad that I captured these images. Both of us were going a little stir crazy (I never left the hospital) and this moment captured the mood perfectly. And I have proof that she really did kiss this balloon. She still doesn't believe that she did something so silly.

Here is a close-up of some of the bubbles. They have a really cool texture and I am really pleased with the end result. 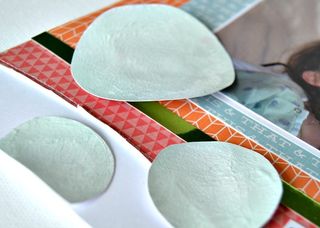 I hope I have inspired you to pull of one of the many wonderful stencils or Mascils that Clear Scraps has to offer and try something new. This technique can be applied with so many of them!

Awwww...how cute. It's tough to have a baby in surgery, I know. It's nice to have a positive memory that will make you smile! And this is a great technique!